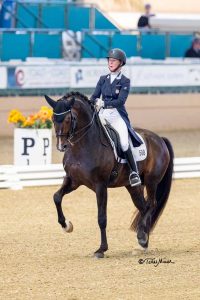 The 73rd Annual Del Mar National Horse Show Dressage week concluded today with an Afternoon of Musical Freestyles after an energizing week of competition. From teams battling for World Cup points to a beautiful retirement ceremony for Legolas 92 and the entertaining shopping and dining, it was again a highlight in many riders’ show schedules.

Today’s anticipated class was the CDI-W FEI Grand Prix Special, which featured top riders Steffen Peters and Sabine Schut-Kery. The two riders placed first and second, respectively, on Friday in the CDI-W FEI Grand Prix Test. Today, the athletes switched places. Schut-Kery, who is still new to the Large Tour competition, is proving she is capable of holding her own among some of the top horses and riders in the world.

Schut-Kery and Alice Womble’s Sanceo earned an overall score of 74.553% to take home the blue. Peters and Four Winds Farm’s Rosamunde scored an average of 72.829% for second place and Charlotte Jorst and Kastel Denmark’s Kastel’s Nintendo received an overall score of 70.255% to round out the top three placings in the class.

“Sanceo really displayed today what an honest and solid horse he is in his first season at the Grand Prix level,” Schut-Kery explains. “I’ve had him since he was three years old and have really taken my time to develop him. At this point, it feels very harmonious, like he has a certain level of confidence in himself. Now, we will work together on getting stronger and polishing up the test.”
The FEI Young Rider Freestyle saw familiar names from the week, with Christian Simonson and Christina Morgan’s FRH Rassolini moving in to take home first place honors with a 70.708%. Jan Ebeling has been in the top three placings all week and today was no exception. He and Amy Ebeling’s Behlinger took home second with an overall score of 67.250%. Mackenzie Ryall and her own Don Heinrich placed third with a 62.291%.

The FEI Junior division was comanded all week by Canadian rider Brooke Mancusi riding her own Westphalen gelding, Wellknown. She earned blue ribbons in all her classes, including today’s FEI Junior Freestyle. She and Wellknown earned an overall score of 69.333%. Kenzie Riddell and laura Bill’s Stonewall Good Deal Lady took home second place with a score of 65.833%. Hope Chacon and her own DG Bantana closed the placings with a third place finish with a 62.5%.

The Afternoon of Musical Freestyles concluded with the CDI* FEI Intermediaire I Freestyle in the Del Mar Arena. Jan Ebeling and Ann Romney’s Sergio Leone produced a beautiful round to earn a score of 71.833% and a blue ribbon. Nick Wagman and Elizabeth Keadle’s Ferano had a successful week, ending it with a second place finish, not far behind Ebeling, with a 71.333%. Ari Lopez and Karen Kahn’s Flynn also had a beautiful round, landing them in the top three today, with a 70.375%.
We would like to thank all our sponsors, spectators, exhibitors, and vendors for a wonderful week of showing at the Del Mar National Horse Show. Please enjoy some of our favorite moments below from our show photographer, Terri Miller. We look forward to seeing you next week for Hunter/Jumper week!