Sabine Schut-Kery: From Paddock to Grand-Prix

BY: Kristin Karlisch for the Hannoveraner Verband e.V. 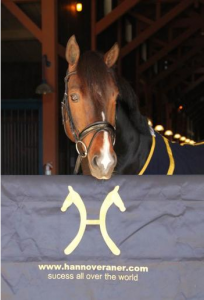 We are proud to announce that we have been able to recruit Sabine Schut-Kery to become part of the Hanoverian Team. Sabine is based in Thousand Oaks, California, where she is training her horses, among them the now 10-year-old Hanoverian stallion Sanceo by San Remo/Ramiro’s Son II, bred by Gerhard Dustmann and owned by Alice Womble-Heitman and Dr. Mike Heitman. Sanceo has been discovered by Sabine herself when Alice and Mike sent her to Germany in order to find a horse to follow their older horse “Cacique” who had been trained and competed by Sabine until then. Sabine saw Sanceo on the lunge at Johannes Westendarp’s place when he had only been under the saddle for three times. For Sabine “it was love at first sight” and luckily Alice, Mike, and daughter Jenee felt the same way when they all came back ten days later to try-out the young stallion. Sabine felt what she had seen before: “He had a very steady rhythm, he was energetic, he was my type of horse.” The decision was made. A few months later Sanceo was imported to the US and has been with the Womble-Heitman family and Sabine ever since.

Being under Sabine’s training, Sanceo has been able to note remarkable success every year, among those high placements in the US National Young Horse Championships in Lamplight, Chicago, which are comparable to the German Bundeschampionat, representing the USA in the World Championship for Young Dressage Horses in Verden, Germany, and all the way up to the Pan-Am Games last year, where Sabine and Sanceo were part of the US Gold Medal Team. That caught our attention. We wanted to learn more about how the two work together, and how they have developed over time.

Their success is built on two strong pillars, one being Sabine’s training, and the other one the way Sabine and Alice and Mike manage the horse. Every decision regarding Sanceo’s training and show plan is made by the three in conjunction, which also provides Sabine the freedom to give Sanceo more time before moving him up another level or skipping certain shows if she feels the need to do so. It is this thought through horse management that keeps a horse fit, healthy, and most of all happy with his work over so many years. Sabine makes sure that she does not ask for too much from her horses, and that they get regular breaks in between big shows to relax, enjoy life and collect new energy. Sanceo enjoyed such a three month break after the Pan-Am games last year. Many riders and owners would be nervous to not try to immediately keep going when the horse is in such good form, but Sabine and Sanceo’s owners, Alice and Mike Heitman understood that it does not count to have your horse fit just for one season, but that it needs to be fit for a lifetime. As Sabine just proved last weekend at the Los Angeles Equestrian Center, this is the right approach. The pair moved one level up from the prior season and won the Inter II with Sanceo being on top of his game “He felt energetic yet relaxed at the same time.” 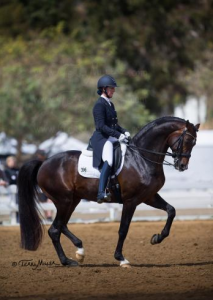 To understand how Sabine builds her training, it is important to know where she comes from, and how she herself has developed as a rider. Born in Krefeld, Germany, Sabine is the only one in her family affiliated with horses. Her way into the sport has not always been as easy and paved out as it may seem. She made her first riding attempts when she was 10, cleaning stalls and grooming ponies in a barn in her neighborhood in order to earn her riding lessons. An experience she now values as it has given her the best perspective and understanding of the horse’s needs early on. In the traditional German way, she started very broad, covering dressage, jumping and cross-country. Due to limited financial possibilities, shows could only be attended in the immediate surrounding area that was close enough to ride the ponies to the show. The second half of the pony-barn was at that time rented by Günther Fröhlich who just started promoting Friesians and Andalusians in Germany. Through him, Sabine made her way into exhibition performances and even received her silver driving medal which requires driving a four in hand.

Sabine’s next step was the professional apprenticeship as a German “Bereiter” under Jan Bemelmans who furthered her dressage skills and knowledge. After completion, however, she decided to go back to Günther Fröhlich. For Sabine, riding is about improving a horse, no matter what breed. “My decision to go back was driven by the curiosity how to train a horse that was not so well equipped for dressage. Improving the horse was always the main goal; going to a show naturally came out of it. That was and still is very important to me. I ride because I love my horses and making them better is the first priority. Once I did that I can go to a show and perform.” 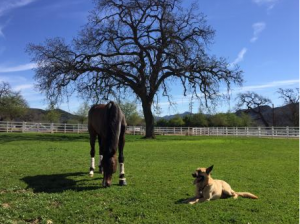 Besides, Sabine also highly valued the variety in the work with horses that was offered to her: “With Günther Fröhlich, we performed in exhibitions with Friesians and Andalusians and I really enjoyed the creativity that comes with those performances and the bond you create with each horse when teaching them how to sit, rear, and bow on command or perform in sidesaddle or in front of a carriage. At the same time, it was equally important to us to have all the horses trained correctly according to the German training scale and thus we naturally competed also in open dressage shows.” Sabine was also one of the early core members and creators of the now famous German Horse Musical “Zauberwald” (“Magic Forrest”). What she took away from that work was really the universality and variety in training. “The aim was always good riding, we had to bring the horses to a state of mind where they where able to understand what was asked from them and perform accordingly. Especially working with Stephanie Meyer-Biss, I learned how to develop the gaits of a Frisian or Iberian Horse and to teach these breeds to move more through their bodies, while most of them are considered to be ‘leg movers’”

After Stephanie Meyer-Biss, Jan Nivell has been another trainer that left a remarkable note in Sabine’s way of working with a horse. “From Jan Nivell I learned to always be open minded in my training approach with the horses. There is never only one way. Sometimes you have to take a step to the left or to the right, or find a way to work around a problem in order to move forward again.” The path Sabine took has formed a very clear idea on how to manage and develop a horse. Consequently, as Sabine acts as a trainer herself, for her the most important thing is that her students share the same philosophy and love for dressage she does.

A high variety in the daily work and focus on the basics of rhythm and looseness still form the foundation of Sabine’s training philosophy and decide the way she manages her horses. In her barn, a horse can be a horse. Even Sanceo, being a stallion that performs on an international level, is going into pasture turn-out every day, gets his regular hacking and trail-riding days every week, and should he be a bit tense or not in the best mood, a day on the lunge where he can just relax and stretch without a rider will always cheer him back up. The majority of her training sessions are focused on the basics. To Sabine, the recipe for success comes from the technical side as well as from the horse’s inner readiness. The technical side means the horse has to correctly and willingly respond to every half halt, and the rider has to bring the interaction of weight, leg, and rein aids to perfection. If that is combined with a relaxed and motivated horse, the path to success is build. Fully in line with that, on the question of her most remarkable moments with Sanceo, Sabine mentioned exactly those small moments where she realizes that her philosophy and her way of training enables Sanceo to pick up on new things. 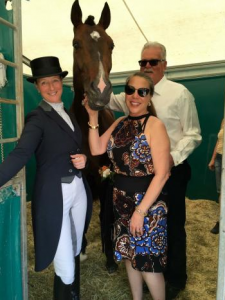 “When I started to do one-tempi changes with him, I thought this would take us a few months until he had them down, but after a couple of tries he just did it, just like that.” Also permanent trainer Christine Traurig sees the reason for Sanceo’s ability to pick up on those things this quickly in the quality of the foundational work Sabine does with him. With a thorough basic education, everything else falls into place. For Sanceo, things have fallen into place over the last years and thus Sabine has set herself and her horse ambitious goals: Young Horse Grand Prix this year and representing the USA in International competition again. – All under the premise Sanceo is ready, as Sabine herself as well as Sanceo’s owners Alice Womble-Heitman and Dr. Mike Heitman have always done it.