Sabine Schut-Kery is weighing the next goal for the 12-year-old stallion Sanceo after the successful launch of the pair’s Big Tour career at the newly created Adequan West Coast Dressage Festival. But Sabine plans to be just as patient as she has been in the 2 1/2 years developing Sanceo from small tour that won her 2015 Pan American Games team gold medal to Grand Prix.

“The goal and priority  is to continue to develop Sanceo into  a quality and happy athlete  one step at a time and we are excited about the future,” said the German-born Sabine of Thousand Oaks, California in her ultra low-key style.

Sanceo, owned by Dr Mike and Alice Womble-Heitmann of Horsegate Ranch in Hempstead, Texas was first competed by Sabine in young horse classes eight years ago, making it to the World Young Horse Championships as a six-year-old in 2012. In 2014, the duo won the U.S. Developing Prix St. Georges championship and a year later, still at small tour, was on the U.S. gold medal team at the 2015 Pan Am Games.

As final preparations for the move to Big Tour, Sabine and Sanceo went to Europe on a grant last year to train with Jan Nivelle and compete in German national Intermediate II and small Grand Prix.

“The plan was to take the time to make his international Grand Prix debut when he is ready,” the 49-year-old rider told dressage-news.com, “and it paid off.”

Although stallions can be difficult, Sabine said Sanceo “knows he is a stallion but when it comes to work I can comfortably say that he is focused and committed to his job and that tells me that he enjoys his work.” 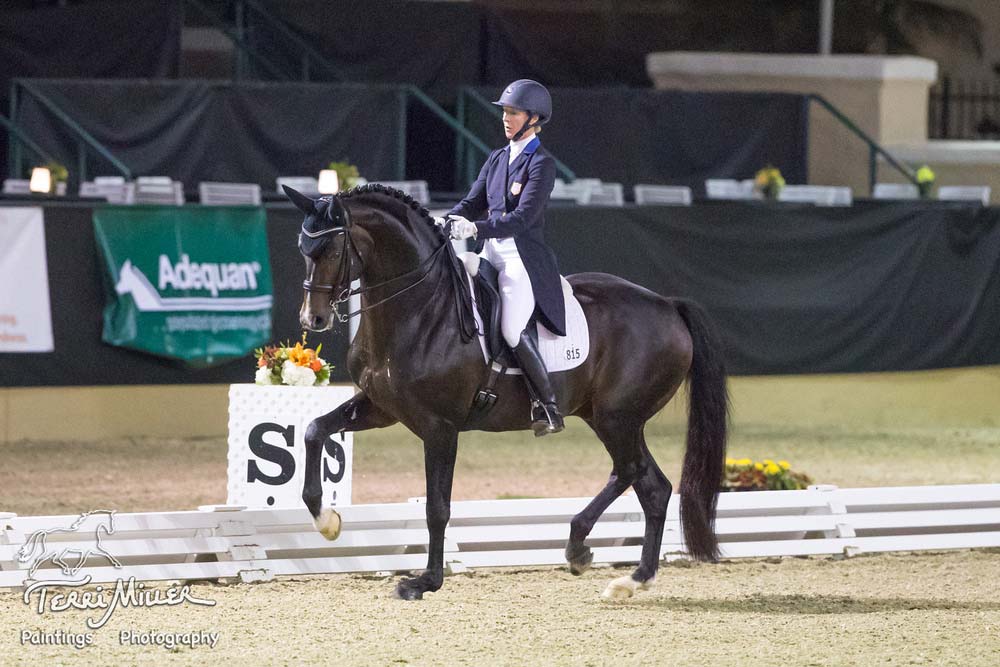 That was clear when the pair made their Big Tour debut at the World Cup event at Del Mar, California last week.

Two mistake-free rides in the World Cup event at the West Coast festival, including a Grand Prix score of 74 per cent that was the second highest by an American combination at this early stage of the competition year.

The circuit in Wellington, Florida moves into high gear this week with world No. 4 Laura Graves on Verdades and the developing Big Tour partnership of Adrienne Lyle and Salvino in the lineup of 40 Big Tour horses and riders while the first shows in 2018 are scheduled in Europe and Australia.

Sanceo, Sabine said, “continues to show a huge amount of rideability and consistency  in a challenging evening indoor atmosphere” at Del Mar where the pair will compete in the next two West Coast events

After the remaining two shows into mid-February, they intend to move to Wellington for the tail end of the Adequan Global Dressage Festival shows that include the big purse CDI4* and the finale Nations Cup.

The World Cup Final in Paris in April and the World Equestrian Games in Tryon, North Carolina in September are the two championships on the calendar this year but Sabine isn’t saying whether they are in her sights. The United States is expected to be one of six teams qualifying at the Tryon World Games for the Olympics in Tokyo in 2020; but if not, the Pan Am Games next year provide another chance to do so.

Her husband, a movie stunt performer, put together the music that included the Last Samurai and and the Last of the Mohicans for her winning freestyle.

“My goal and motivation is to go as far as I can with a  happy horse in the process,” she said. “Decisions for competition goals are made one step at a time.”