16 Things to Know About the Dressage Stallion Sanceo 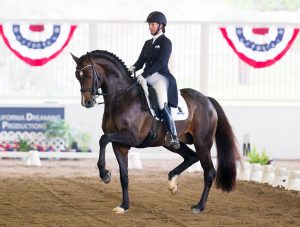 Talking to trainer Sabine Schut-Kery, it’s hard not to get excited about one of America’s most promising young stallions, Sanceo. Owned by Alice Womble-Heitmann and Dr. Mike Heitmann, Sanceo has been quietly rising in the U.S. dressage rankings since being imported by the couple seven years ago.

Among his most impressive accomplishments: representing the U.S. in the World Championship for Young Dressage Horses in Verden, Germany; multiple 2014 wins at the U.S. National Young Horse Championships in Lamplight, Chicago; qualifying for and being a part of the gold medal-winning 2015 U.S. Pan American Games team; and scoring a 71.6 and a 72.7 during his Grand Prix (Developing Horse) debut at CDI-level shows at Del Mar and San Juan Capistrano, California in 2016.

Bred by Gerhard Dustmann, the Hanoverian by San Remo/Ramiro’s Son II was discovered by Sabine, herself, while on a horse buying mission for the Heitmanns. “He’d been under saddle only three times at that point and I didn’t dare get on him!” says Sabine. Still, Sanceo left a lasting impression on her, and when she traveled back to Germany with the Heitmanns two weeks later, it was love at first sight for all of them. The rest, as they say, is history.

Here are 16 things Sabine shared with us about Sanceo:

1. The first time Sabine ever saw him, Sanceo was on the lunge line, “That can be a difficult way to evaluate a young horse since they’re constantly turning,” she says.

2. Still, the stallion’s talent was obvious. “I was so impressed by how, on a 20-meter circle, he was trotting and cantering. He was always balanced and carried himself the right way.”

3. Sabine says that even as a young horse, Sanceo always moved in a very mature way. “All three of his gaits were good, which is very important,” she says.

4. Sabine taught him how to make his first flying lead changes over a ground rail as a five-year-old and says he picked them up quickly.

5. Sanceo is very well mannered, but Sabine says she’s always aware of the obvious: “There’s definitely a stallion in there. People don’t see it, but I’m always proactive about good manners. I don’t want it to get to point where he’s bratty or takes over.”

6. Sanceo was bred for the first time last year and Sabine worried that the experience might change his disposition. The good news? “It didn’t change a thing and he was a total gentleman,” she says.

7. He gets turned out seven days a week and he loves to roll in the dirt!

8. Alice Womble-Heitmann and Dr. Mike Heitmann keep Sanceo with Sabine in Thousand Oaks, Calfornia for training, but when he goes home to their farm in Texas, he’s treated like royalty. “[Alice and Mike] noticed how much he loves to roll, so they made him his own sand pit in the paddock,” says Sabine. “He has a double stall and big green pastures to turn out in.”

9. He is best buddies with Romo, Sabine’s rescue dog. In fact, Sabine has trained Romo to exercise himself by following Sanceo, running along outside the dressage court while Sanceo is being ridden.

10. Sanceo is a very sensitive horse. “He can sometimes get spooky about some things, especially when the scenery changes at home,” says Sabine. “He really finds comfort focusing on the work.”

11. He doesn’t like sugar and is very picky about treats. He eats carrots but won’t touch apples. One thing he does like? Sabine’s homebaked horse treats, which she makes every year for the holidays.

12. This year, Sanceo will become a full-fledged Grand Prix horse. “I competed in some [Developing Horse GP classes] last year, and now it’s time to move into the real Grand Prix,” she says. “I would love to take him to Europe in the summer to compete.”

13. Sanceo enjoys his work. “He is a really good student. You can see when you work with him that he is very committed and connected to his rider.”

14. He gets to spend time out of the ring every Saturday, when he goes on trail rides with Sabine’s assistant trainer.

15. Sabine says that being a stallion is both Sanceo’s biggest challenge and the thing that sets him apart. “He can get distracted due to his natural stallion instinct, but if you can channel it in the right way, it creates an amazing, expressive energy.”

16. “Sanceo’s work ethic is the best thing about him, and his honesty.”