~Article as posted by DressageDaily.com. 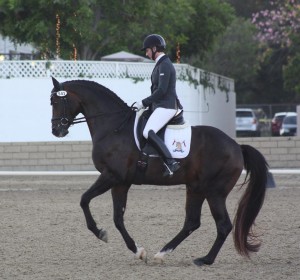 Sabine Schut-Kery and the talented Hanoverian stallion Sanceo recently returned to California after spending nearly two months in Wellington, Florida, where they handily qualified for the 2014 Markel/USEF Developing Horse Prix St. Georges Dressage National Championship. In Del Mar they earned a 79.868 to win the $500 Prix St. Georges Sweepstakes. Acknowledging her dominance in the national classes, Robert Dover playfully chided Schut-Kery, suggesting it was time to move on. “You’re ready for the CDIs,” he urged. “You’ve got to build for greatness!” Schut-Kery found Sanceo (by San Remo out of St. Pr. Hauptstutbuch Riveraas) a 2 ½-year-old in her native Germany for owners Alice Womble-Heitmann and Dr. Mike Heitmann. “He’s a very sensitive horse, and it’s very important to me that I keep him mentally happy and physically healthy,” she says. “Because he’s a stallion, I’m concentrating on managing that side of him so that he stays focused on the job and doesn’t get sidetracked.”

Under her careful guidance, the 8-year-old Hanoverian has steadily gained confidence and maturity since the pair represented the United States at the Young Horse World Championships in Verden, Germany, in 2012. The trip to Wellington was an important step in their journey. Dover himself planted the seed when Schut-Kery participated in the USEF Dressage Observation and Strategic Planning Session in California last November. The Heitmanns embraced the plan, shipping Sanceo from California to Florida, with a stop at their Horsegate Ranch in Texas along the way, and then setting up the horse in Wellington at the Palm Beach Equine Sports Complex, conveniently located across from the Palm Beach International Equestrian Center.

“We went to Florida with the goal of exposing him to a more concentrated show schedule and competing in a hotter climate,” Schut-Kery explains. “He did very well, winning every class we entered with very consistent scores. His quality and his great work ethic and honesty really shined through.”

For Schut-Kery, the trip east meant jumping into Wellington’s 24/7 horse culture with both feet. “Professionally, it was quite an experience. The footing is really amazing, and there’s so much going on.” When she wasn’t showing, she attended educational seminars, watched a clinic with Kyra Kyrklund, worked with U.S. Developing Dressage Coach Debbie McDonald and had three-time Olympian Juan Matute offer pointers on the piaffe and passage.

Florida was an unforgettable opportunity, but don’t expect Schut-Kery to relocate any time soon. “I’m a total California girl,” she says. Her coach, Christine Traurig, is here, and her husband, Kristian Kery, works in Hollywood as a stuntman and filmmaker. And her training business is based at one of Southern California’s most idyllic equestrian facilities, El Campeon Farms in Thousand Oaks.

As she looks ahead to the Developing Horse Championships in Chicago in August, Schut-Kery is busy preparing Sanceo for his CDI debut at Intermediaire 1 debut at next month’s annual Dressage at Flintridge CDI* in La Cañada, California. “The long-term goal is the Grand Prix. He’s doing piaffe and passage, but I have no desire to rush. I want it to be a positive experience for him.”