~Article as posted by DressageDaily.com.
~By Kenneth J. Braddick 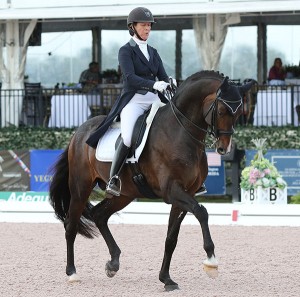 WELLINGTON, Florida, Jan. 24, 2015–Led by Sabine Schut-Kery and Sanceo, the United States dominated the World Cup small tour taking top places in Prix St. Georges and Intermediate 1 that are vital in America’s campaign to win gold at the Pan American Games and thus a starting place at the 2016 Olympics.

The nine-year-old Hanoverian stallion (San Remo x Ramiro’s Son II) ridden by Sabine, originally from Krefield, Germany but now an American citizen and based at Thousand Oaks, California, won both the St. Georges with 71.184 per cent and the Intermediate with an identical result.
Kasey Perry, an adult amateur based in Spokane, Washington on the spectacular Goerklintgaards Dublet was second in the St. Georges on 70.947 per cent with Olympic and World Games rider Tina Konyot of Palm City, Florida on Wyoming third on 70.921 per cent.

Sabine and Sanceo took the Intermediate with an identical score of 71.184 per cent with Tina on Wyoming second on 70.895 per cent and Kimberly Herslow of Califon, New Jersey on Rosmarin third on 70.763 per cent. Two other American combinations filled the fourth and fifth spots.

Sanceo was trained and competed by Sabine, 46 years old, to earn a start as a six-year-old at the World Young Horse Championships in Germany in 2012 and two years later won the national deveoping Prix St. Georges championships.

Now, with three straight CDI victories at the Palm Beach International Equestrian Center she is a leading prospect for her first United States championship team, the Pan American Games in Toronto in July.

Before then, however, she must finish among the top four or so combinations in the country to join the squad of Big Tour and Small Tour horses that will head to Europe for two qualifying competitions for final team selection of four combinations–probably two from each division–by June 10.

Sabine first came to the United States in 1998 to work for a Friesen breeder in Texas but when he died almost 10 years ago she moved to California to further her education in dressage. She trains with Christine Traurig and Debbie McDonald when she is traveling such as this trip to Florida where Debbie is based in the winter.

She was given the ride on Sanceo by owners Alice Womble-Heitman and Dr. Mike Heitman of Hempstead, Texas after training a former jumper horse to go into CDI small tour.

Alice, she said, is passionate about dressage and knows the sport so is “willing to do what it takes to make a dressage horse and patient enough to let me take the time. She wants the best for the horse.”
The Pan Am Games was not a goal but part of the process of producing a good horse, seeing the reaction from judges and go where it goes.

“Yes, I want it to be honest,” she said of the Pan Ams, “I want to push for it. But I don’t want to get caught up in running after it.

“It’s the same as when you are in a big class—of course, you’re nervous. But you stay in the bubble, do your job and see where it takes us.

“Of course there is the desire. With this horse, we had dreams and hopes.”

Sanceo is being schooled in the Grand Prix movements and will move up to the Big Tour after the Pan Ams, or sooner if the duo do not make it to the U.S. team.

Her husband, Krisztian Kery, is a movie stuntman who has played in several top movies including the latest hit, “American Sniper.” He is also a horseman and she credits him with providing eyes on the ground that has been helpful.

Krisztian is from Hungary and they met in Germany at a traveling horse show. When she moved from Europe to Texas he went with her.

His creativity has been helpful in creating a freestyle for Sanceo, and his knowledge of film making has been valuable in creating sales videos.