~Article as posted by DressageDaily.com.
~Written by Yellow Horse Marketing for the California Dressage Society 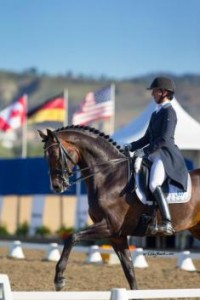 After a fifth-place finish in Friday’s hard-fought Prix St. Georges class, Sabine Schut-Kery and Alice Womble-Heightman’s bay Hanoverian stallion Sanceo (San Remo x Rivera by Ramiro’s Son II) returned to winning form in the Intermediaire I Freestyle at theCalifornia Dreaming Productions’ Capistrano Dressage International CDI-W/Y/J/U-25 on a score of 73.950%. Despite this being the first time Schut-Kery had performed the new freestyle (which was created with the help of her husband Kristian Kery), her elegant ride aboard Sanceo was good enough to earn the narrow victory over Elizabeth Ball riding Cadence LLC’s Dutch Warmblood gelding Avanti (Tuchinski x Fleur by Naturel) with 73.050%. “I really wanted to focus on training and ran a little bit out of time – so I would have liked to have had a few more practice rides, but it ended up going well,” said Schut-Kery of her freestyle. “Sanceo has been very consistent and has given me a great season already, so I’m really, really happy. We now have all of our qualifying scores for the Pan American Games and we’re sitting in a good place, so we’ll go home and see what happens now. Most of all, I realize that to compete at this level with an eye on something like the Pan Ams you have to have the right mount, and I’m so grateful to Sanceo’s owners to have the ride on this very special horse.”

Rounding out the CDI freestyles in the Olympic Arena was Mia Slaughter, who earned her first international win with Jenifer Luce-Zakhary’s Hanoverian gelding Harrington L (by His Highness) in the Junior Freestyle on a score of 61.167%. Meanwhile, Catherine Chamberlain continued to rack up wins in the CDI Under 25 division, adding today to her growing resume with a score of 65.543% in the CDI Grand Prix 16-25 Test aboard her KWPN gelding Verdicci (Krack C x Nadine’s Monday by Jackson).

Exhibitors now look forward to the second edition of California Dreaming Productions’ back-to-back series of competitions in San Juan Capistrano with the Festival of the Horse CDI 3*/Y/J/U-25, which begins Wednesday, March 25. Support for this elite series of West Coast dressage competitions has proven to be overwhelmingly positive as almost 140 CDI rides are scheduled to trot down centerline later this week, setting a new record for participation in CDP events. In addition to great competition, fans from around the world can once again tune into live video streaming with commentary by Axel Steiner on CDP Live beginning Thursday, March 26. For more information, visit the California Dreaming Productions website, http://www.californiadreamingproductions.com.