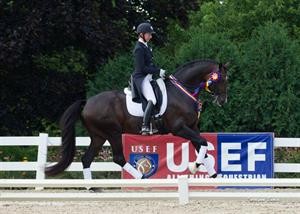 Sanceo (San Remo x Rivera/Ramiro’s Son II), ridden by Sabine Schut-Kery (Thousand Oaks, Calif.), repeated her polished effort from Friday again on Sunday, winning both classes and the title with an overall score of 76.516%. Throughout Sunday’s test, the eight-year-old Hanoverian stallion was polished and poised in the Prix St. Georges movements, distancing him from the rest of the field and earning a 76.912%. Schut-Kery expressed how grateful she is to ride a horse like Sanceo, as finding the right horse can be challenging.

“You look to have all your ducks in a row, but in the end you don’t know until you have them home,” Schut-Kery said. “To me the most important part is the work ethic and the willingness, and this horse, as an example, has the biggest heart and the best work ethic and willingness. You just cannot know when you go and try them a couple times. You can get a feel for them and see the gaits, but it’s always a little bit of playing poker, and you just hope it turns out.”

Petra Warlimont (Hygiene, Colo.) and Susan Alvey’s eight-year-old Hanoverian gelding, Highschool MCF (Hochadel x Ria/Rotspon), maintained their spot in third place with a score of 68.480% on Sunday and an overall total of 69.141%.