~Article as posted by DressageDaily.com.
~Written by USEF Communications 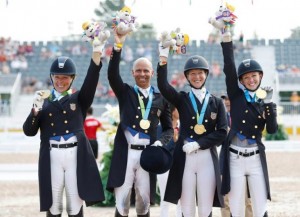 Caledon, Ont. – Excellent performances by all four members of the U.S. Pan American Dressage Team over two days at the 2015 Pan American Games resulted in a Team Gold medal win and direct qualification for the 2016 Olympic Games in Rio de Janeiro, Brazil. The team, composed of Sabine Schut-Kery and Alice Womble’s Sanceo and Kimberly Herslow and Kiroli Enterprises LLC’s Rosmarin in the Small Tour, and Laura Graves and her own Verdades and Steffen Peters and Four Winds Farm’s Legolas 92 in the Big Tour, was focused and consistently excellent to end on an overall score of 460.506. Both Graves and Herslow marked personal best scores in the FEI Grand Prix Special and Intermediaire I tests, respectively.

“I am so pleased that the team came and had personal bests here,” said a very proud Chef d’Equipe, Robert Dover. “It showed that our Small Tour horses are beautifully trained and our Big Tour combinations showed why they are ranked seventh and eighth in the world right now. What could be better for a Chef d’Equipe than to bring a team and have them earn personal bests at a very important moment. Having earned qualification for the Olympic Games, it allows us to now focus and put our energy into preparing for Rio [de Janerio].”

As the sun rose in Canada this morning, the U.S. Dressage Team sat in first place by a small margin over Canada. The athletes felt the pressure as they faced FEI Intermediaire I and Grand Prix Special tests against formidable international competitors. With excellent leadership from their Chef d’Equipe, each individual executed their tests with confidence and skill to achieve the Pan American Games Team Gold medal. As Peters said, “The Canadians did a wonderful job. They rode extremely well and gave us quite the run; it wasn’t easy.”

Graves and her KWPN gelding Verdades performed masterfully in the FEI Grand Prix Special test. The pair achieved a personal best score of 77.177%, impressing the judges with their energy and precision. Graves was effusive in her praise of her mount. “He was amazing out there, really on again today. He loves Toronto!”

Herslow and Rosmarin were second to go in the Small Tour for the U.S. Exuding confidence and poise, the pair bested yesterday’s ride with brilliant extension and expressive movement. With a score of 77.158%, which set a new personal best, they were rewarded for their efforts. Herslow credits her coaches and her team for the great performances. “I feel like I had the most expression I have ever had in that test. It was an incredible score for an incredible ride. I am so happy to do my personal best here and contribute this score to the team.”

Schut-Kery and Sanceo performed an excellent FEI Intermediaire I test this morning. The first of the U.S. athletes to ride down the center line, the pair improved on yesterday’s score in earning a 73.553%. The nine-year-old Hanoverian stallion continued to be focused and energetic as the duo ironed out some minor bobbles in yesterday’s ride to show an improved score. Their test today was highlighted by clean changes and precise pirouettes. “Our test felt really good,” said Schut-Kery. “We stepped up and improved from yesterday which was our goal. Going into [Tuesday’s] Freestyle, we will aim to continue to better our performance.”

Peters and his accomplished mount Legolas 92 faced some challenges in their performance in the FEI Grand Prix Special. Their score of 72.667% reflects several bobbles in their execution of the test. Keeping the perspective of a champion, Peters was positive and forward thinking. “We had a few mistakes out there, but he delivered yesterday and Tuesday is a new day.”

Individual competition takes place on Tuesday with the FEI Intermediaire I Freestyle and the FEI Grand Prix Freestyle beginning at 11:00am ET.