~Article as posted by DressageDaily.com.
~Written by Diana DeRosa 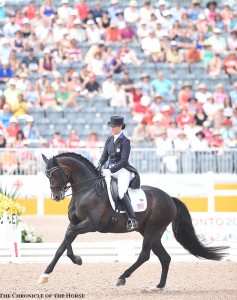 In the press conference after the awards ceremony for the Dressage team medals at the Pan American Games in Toronto, Canada, Olympic veteran Steffen Peters admitted he was worried. Even though the U.S. sent a top level team to the Games to help insure their victory, Canada had sent an equally strong team. A team that was good enough to beat the Americans. While in the end it was Team USA that took the Gold Medal and their ticket to next year’s Olympic Games in Rio, it could just as easily have been Canada standing on that center podium.

Steffen applauded the high level of riding that the Canadians displayed and the good battle they fought. In the end they were just under 6 points short of claiming that victory. The U.S. team of Steffen Peters aboard Legolas 93, Laura Graves riding Verdades, Kimberly Herslow on Rosmarin and Sabine Schut-Kery riding Sanceo scored 460.506 to the Canadian team score of 454.938.

Bronze medal honors went to a very happy Brazilian team. Their score of 414.895 was less than 3 points ahead of fourth place finishers, Team Mexico (412.467).

It wasn’t all bells and whistles for the U.S. team who despite some brilliant moments also had a few bobbles here and there. After Legolas 92 performed probably the best test of his career in the Grand Prix, their Grand Prix Special had a few mishaps that lowered their score. They scored 77.240 in the Grand Prix and 72.667 in the Special. The lower score was after having two mistakes in the tempi changes, one bobble in the piaffe and a scoot at one transition down the long side.

Yet, Peters was totally happy with the way things went overall and was thankful for having strong teammates to help balance out the score. Peters knew before going into the Special that it would not be easy. “It’s always his hardest test,” he explained.

The test requires you to do the flying changes on the opposite lead which Peters said, “makes him nervous and he is still a bit insecure about it.” He went on to say, “I can’t feel negative about Legolas because he did an outstanding job yesterday in the Grand Prix. It was one of his best performances ever.”

When asked about the bobbles in the piaffe and passage Peters didn’t quite know why they happened but felt that Legolas was a little tight in the back and that he should have spent a little more time loosening him up, but overall he wasn’t bothered by those mistakes.

When asked why the Grand Prix was so superb, Peters gave credit to Legolas being stronger in the piaffe/passage and that improvement was just what they needed to bring up their score.

While Peters has competed in a Pan Am Games before with great success, this was the first time for teammates Kim and Sabine.

When asked about her horse Kim quickly commented, “He’s my soulmate and I’ve had him since he was three. He’s been an incredible partner. He’s the whole package. He’s beautiful, he moves great and he tries incredibly hard for me. And I love that it is all peaking at this moment.”

Kim agreed that it’s been a real pressure not having qualified for the Olympics and so the first thought when she learned they won the Gold was that “it was a huge relief and totally awesome.”

Laura, who is her home country’s hero for coming along with such an amazing horse as Verdades, was also thrilled with the overall setup. “The horses are incredibly happy with nice safe boxes for them. The footing was fantastic and that’s always a big fear because you don’t want to risk your horses. It was pouring when we arrived but the very next morning it was perfect. The horses have loved being here and we love being here. It’s been an incredibly great team to be on.”

When the conversation focused on her horse, Laura was visibly thrilled noting, “He really rose to the challenge. It was incredibly hot and he’s not known to be a hot weather horse but when I put my leg on he went. And that is all you can ask for. He did that and he did it well. So, I’m very proud of him.”

Despite a small bobble in their test, the strong relationship they have makes forgetting any mishap and moving on to do the next movement well just a part of the package she has with her horse. “When he gets nervous or makes a mistake I’m usually able to settle him and that’s the advantage that we have from being together for so long.”

Sabine chimed in next noting, “I’m extremely proud of my horse. He’s a stallion and so I have to deal with a little bit of emotions there as well. I am very pleased how he stayed focused on me and really enjoyed the whole experience. It was amazing. I am extremely honored and grateful to be on such a great team.”

When she realized she was a member of the Gold medal team it was at first almost unbelievable to realize that her first experience at such a major event could end this way.

Chef d’Equipe Robert Dover was also quite proud of the team’s achievements and noted that knowing they were now qualified for the Olympics would allow them to relax and focus on that instead of having to worry about getting a team qualified, which Canada is now facing.

Now that the teams have been honored the top 25 or so riders move on to vye for individual medals on Tuesday, July 14, when they will perform their Grand Prix Freestyle test. Fortunately for Peters, he gets to decide which lead to start the tempis on so that Legolas 92 is comfortable and can perform his very best.

Following the Freestyle, the Individual medalists will be named in their final day of competition.

The new format of combining Prix St. Georges and Intermediaire 1 with Grand Prix was well received. This addition was made because the level of riding has improve so much that adding the Grand Prix level gives the lower level riders something to strive for.

The Pan Am Games continue through the 26th with Eventing and Show Jumping still to come. For more about these Pan American Games, visit the website at www.Toronto2015.com.